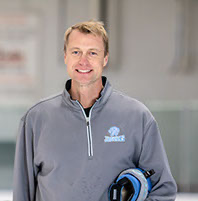 Mike brings a range of coaching and playing experience to the girls program. Mike grew up in the Bloomington youth system and attended Jefferson High School where he played high school hockey under coach Tom Saterdalen and coach John Bianchi. After high school, he attended Gustavus Adolphus College where we continued his hockey career. His coaching assignments have ranged from Pee Wee’s to Bantams to a 4-year JV stint on the boys side. Most recently, he has been coaching U8’s and U10’s on the girls side. Along with coaching duties, Mike served as the Bloomington Girls Hockey Association Hockey Development Coordinator this past year. Additionally, Mike is a Level 4-certified coach by USA Hockey.

There are several places to view/download photos. Downloads are FREE on all sites listed below. Photos can be accessed on:

If you take photos and would like to share them, you can upload the pictures to our team Shutterfly site (link above). If you need assistance accessing photos, or need a login to the Shutterfly share site, please email Cyndi Nightengale.

Login to Bloomington Girls Hockey
Reset Password
Enter the username or e-mail you used in your profile. A password reset link will be sent to you by email.